Saltley and St Saviour's Church through the years

For a thousand years Saltley was the home of a scattered rural community who farmed the western slope of a ridge which runs down to the River Rea. Here were the open strip fields of this sub-manor of Aston. At the top of the hill was the hamlet of Over Saltley around the junction of Alum Rock Road and Bowyer Road. Excavations of the remains of an 18th-century dairy also showed tentative evidence that it may have stood on one side of a village green. At the bottom of the hill was also a small village focus at lower Saltley east of the Rea ford.

The open fields were enclosed late here. High Field enclosed in 1817 was the last in Birmingham. Corn grown in these fields was ground at the manorial watermill near Crawford Street. This was first recorded in 1526 when it belonged to Thomas Holte of Duddeston. By 1690, in common with many Birmingham mills, it had converted to blade grinding and by 1760 was rolling steel.

A windmill at Ralph Street near Alum Rock Road which is shown on Beighton's map of 1725 and a map of 1755 seems to have gone by 1760. This postmill may have been built to grind corn when the watermill turned to metal working. The windmill may then have been abandoned when nearby Duddeston Mill turned back to corn grinding. Saltley watermill was drawing wire in 1850 though by that time not using water power but steam. Saltley Mill was the predecessor of a great swathe of industry which would soon spread along the whole river valley. 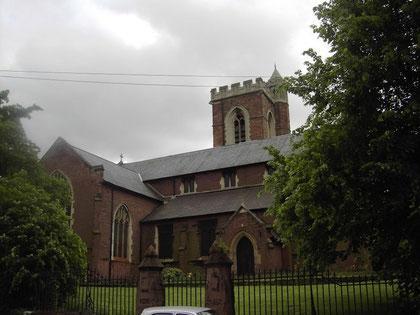 Although little housing development had taken place by the middle of the 19th century, St Saviour's Church, paid for by C B Adderley and Joseph Wright, was consecrated in 1850.

This prominent and distinctive brick church with stone dressing was designed by R C Hussey in perpendicular style and is a surprisingly large building with seating for eight hundred people. It is now a Grade II Listed building. The churchyard railings are a rare survival of the wartime drive to collect iron to make into armaments.

In 1904 a set of eight tubular bells was installed, almost certainly cast by Harrington, Latham & Co of Coventry and donated by Lord Norton. They are sounded from a chiming apparatus on the first floor. They were overhauled in 1976. The church also has a 2½ cwt bell cast by Barwell of Birmingham in 1911 which was brought in 1979 from the redundant St Basil's in Deritend. Long closed for new burials, the graveyard has been given the status of a nature conservation area in this heavily built-up district.